Christopher William Kinsey in Literature Reflective, Music Reflective July 25, 2013January 22, 2016 1,572 Words
The Manchester International Festival, or MIF, has already started to fade in our memories just like the sun is slowly starting to be obscured by clouds. Before it’s no more than a light drizzle in the mind’s eye I shall recall my highlights.

I felt as privileged witnessing the great actor undertaking a Shakespearean role as I did being party to the unique setting. The deconsecrated church in Ancoats provided an absorbing atmosphere that allowed the play to feel large when required but was intimate enough to engage during the delicate nuances each top performer provided. Two tall wooden viewing platforms faced one another with a mud filled aisle separating them. An aisle that was to become the stage throughout, along with the former alter area that gave way to candles beneath the stain-glassed windows.

From the Wicked sisters starting us off with a haunting interpretation that had me squeezing my partner’s hand, to the initial battle scene played out with rain and mud, the experience never let up. Branagh was particularly engaging earlier on as he wrestled with his guilt. As he became the ruthless leader his Lady Macbeth, played by Alex Kingston, demonstrated the plunge to madness with chilling effect. There wasn’t a weak performance during a play that delivers some of Shakespeare’s best lines.

Much has been made of how close the action was in relation to the public – to the extent we were warned not to wear clothes that needed dry cleaning – and how it made the opening sequence all the more breathtaking. Whilst all that talk has been valid a special mention should go to the sequence when Macbeth is shown the prophecy that concludes with the procession of Kings. The alter area had a line of flames that cast a hellish look over a contorting image below. If I say it was multiple actors squirming beneath a patterned sheet I wouldn’t be lying but it would be a great discredit. Periodically a face would appear as it pressed upward through a now seemingly thin cover. What the prophecy foretells is scary enough for Macbeth; the literal vision was a pure art of horror.

Will I see such a strong cast again in an iconic play? Maybe. Will it be in such a great venue? Probably not. 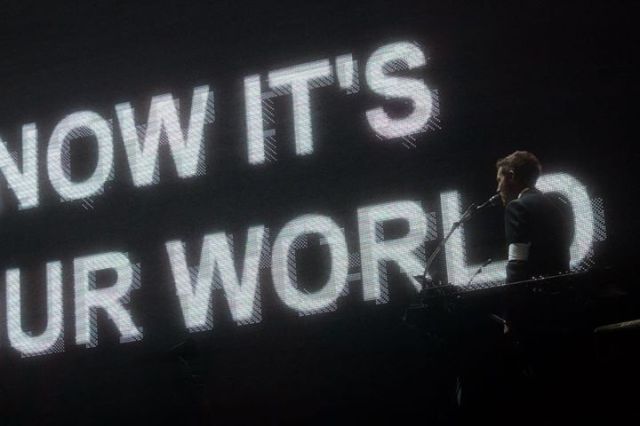 If a viewing of the Scottish play has people discussing the obsession of power then Massive Attack v Adam Curtis took a string of that theme and expanded upon it. After waiting for the curtains to open I found myself in a horseshoe of big screens, meaning the documentary is played all around the public, with the band behind the apex section. Adam Curtis’s film starts with the East and West in the 1960s. He quickly, and without debate, tells us how the two opposing sides want to control and change the world. Through a series of national events and interweaving personal stories we move onwards through history. As we go we’re told the governments realised they couldn’t control the world so they stopped making us worry about that “other side” and to panic over ourselves instead. When computer technology came along they tried to construct models to predict the future. Of course, they failed.

Curtis gets you on his train of thought early on and takes you along his predetermined viewpoints without room for consideration. There are no alternative interpretations, only what he sees as fact. And it works. At least for the purposes here. The soundtrack – because that’s what it was, it was no gig – was played out as a perfect accompaniment. When Nirvana’s version of “Where did you sleep last night?” started to play I couldn’t help but join in. In doing so I reinforced Curtis’s view of the two-dimensional world we now live.

Curtis himself has been quoted as saying the documentary is about the illusion of power and power of illusion. In a world that runs this way it’s us – the normal, everyday majority – that appear to suffer. It seems that Curtis is from The Matrix opening our eyes with a red pill but feeding our minds a blue one of his own creation.

Festival square saw its fair share of the majority each day. It provided a relaxed meeting place with food and drink. The Pavilion also gave us Rob da Bank for a Friday night mix of music and a slideshow of Mancunian music history on the cinema-esque screen. It could have easily slipped into the Land of Cheese but the DJ chose his soundtrack with excellence.

The following night I witnessed New Century Hall and Despacio. Tickets were in high demand for what promised to have all the ingredients of a good boogie. James Murphy of LCD Soundsystem fame joined David and Stephen Dewaele (Soulwax, 2Manydjs). Had you previously seen the latter at a festival you may have been underwhelmed but they played a way befitting the venue. Seven large speaker sets that appeared to have been robbed from a retro-future bar lit up whilst a disco ball glittered across the high walls. It was more disco than dance. Those in search of a Sankeys (RIP) replacement should have been mindful this was still MIF, and as such, a different audience.

A personal highlight of the festival was Tino Sehgal’s This Variation. Beforehand all I knew was it was sensory overload due to a darker setting. I’ll be honest, I was expecting a light show that perhaps distorted images on a projector in a dark room, or something like that. It’s fair to say I was going in blind. Quite apt then that what I found it to be was a room in pitch-blackness thus making me completely blind. If you recall, the Weird Sisters in Macbeth managed to put the heebie-jeebies up me, so being a dark room, bumping into strangers, hearing shuffles and whispers and chanting had me wishing I was in a diaper. After what seemed like an hour (it was thirty seconds) those chants became a full-on dance song. I quickly turned for the exit.

Not proud of feeling like a chicken and getting a strange look from the volunteer outside when I remarked: “That was pretty scary,” I took a few minutes to have a word with myself. I reasoned that a blind-person in a dance club had more noise, more strangers around them, more cause for confusion. I reached the conclusion I should try again. This decision was accelerated by the fact I was also watching the mise-en-scène by Mårten Spångberg entitled Epic. My mind is open to varied interpretations but I couldn’t escape the idea later that evening people wouldn’t have understood it but would be spouting pretentious statements about its true meaning. When it got to the point a guy in a see-through top was waving his out stretched arm slowly to a David Bowie song whilst doing a belly dance that started in his shoulders I knew it was darkness or bust. Although it’s only fair I come clean and admit I stole this particular dance move and used it at the aforementioned Despacio night.

Second time in the pitch black setting of Tino Sehgal I found my inner force. Okay, not exact bravery but the intimidation was more comfortable than the idea of facing more Epic. Slowly my eyes, thanks to a dim purple light above, started to make out shapes. The slap of white paint across the walls gave the room a dimension. A little while longer (about fifteen minutes) I could make out the performers. They were moving around, moving up to guests that had acquired night vision. Together they produced all the required beats, hums, special effects and vocals. They danced at times like a dance troop, at others formed segregated areas. In the dim light it struck me I was in an alternative reality’s idea of a nightclub. It had music, people, an underground feel like a twisted Turnmills (RIP). Moody acid.

Familiar songs sometimes appeared with a unique twist as the talented performers made their way through each variation like one organism. For a person that started out so scared I amazingly didn’t want to leave. So I didn’t until they formed a single wall and sang “it was time for us to go now” with cheeky smiles. It hadn’t all been music, Sehgal likes debate, too. There were periods when the show stopped and the performers would raise and discuss various points. Like the income you earn is of great consequence but the job you do could be of little consequence. Even these staged chats had an ad-libbed feel that complemented the experience. It wasn’t just the music that faced time-outs, very briefly the purple light above shone full beam giving the blackness a rest. By now the light was the unwelcome stranger to the rapture given by the dark.

An experience so good I went back the next day and went through it all again, this time even receiving a hug from a performer as we danced in close proximity. Much closer to the action than even those on the front row at Macbeth.

This year’s MIF was a resounding success. It succeeded in opening up the city and its people in every possible way. 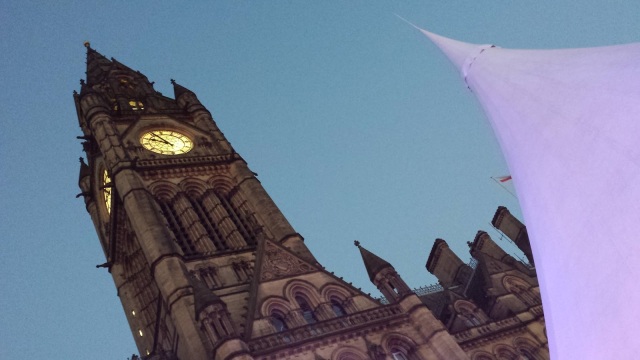