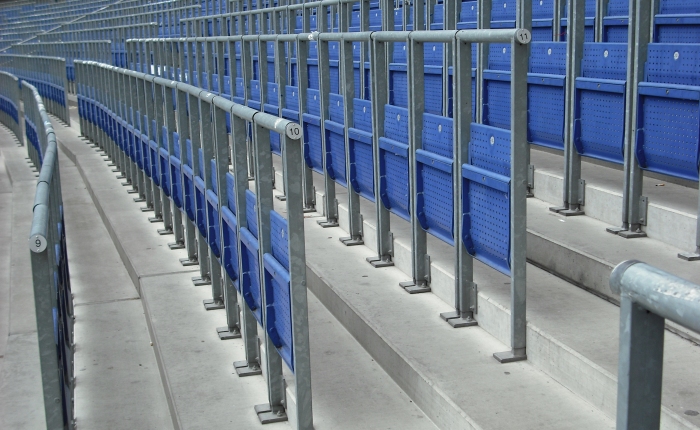 Until three o’clock yesterday afternoon, I would have described myself as a proponent of safe standing areas in football stadia. The arguments for have mounting evidence as teams in Germany, and now Celtic, demonstrate its effectiveness. Then a turnstile failure at Manchester City’s Etihad Stadium gave an example of why the risk with standing areas is greater than any benefit.

On the face of it, safe standing is sold as a modern take on an old fashioned way to view football matches. Those that want the system will explain how each person is allotted a seat number which relates to the folded away chair. This ensures order and crowd control. Within the standing areas barriers prevent surges, eliminating forced migration of fans into areas when things get a little raucous.

They rightly point out that in today’s top flight, many fans stand anyway. In doing so they are at greater risk than if they were inside a properly policed safe standing area.

In a perfect world, the arguments for safe standing cannot be denied. 70% of Premier League clubs would back its return, Tottenham Hotspur are even including the feature in the design of their new stadium. It’s also believed Manchester City would incorporate such a section within their North Stand when it’s remodelled to add an extra tier.

But this isn’t a perfect world. The supporters of safe standing never consider the potential pitfalls. At the Etihad on Saturday a power loss showed how errors can align to create potential nightmare scenarios.

It should be noted, there were no major problems at the ground but the blueprint for disaster was written.

As turnstiles became inoperative, queues quickly filled the concourse outside the back of the South Stand and the streets beyond. With some fans being delayed for up to fifteen minutes, there was clearly pressure on staff to appease the frustration.

So they opened the large exits walls beside the turnstiles and allowed fans to flock in, en masse. From a slightly elevated position on chairs, staff made the call for fans to have passes on display. But with such a determined flow, and at least several people wide, it would have been difficult to say with any degree of certainty that every ticket and seasoncard was seen. As with any system, it is the introduction of the human element that leads to problems.

Had Saturday not been against Everton but a Manchester Derby, and the fans were rushing into a safe standing area, the outcome could have been very different. There would have been more fans than available spaces. Unlike with a seat – where if you don’t have one, you can’t sit on someone’s knee – with safe standing the uncounted extras would have squeezed in next to their mates.

Human nature would have led many fans to share their space. But the fans would have kept coming, the available space decreasing. Unlike an all-seater stadium, where overcrowding is immediately apparent, the safe standing area would encourage a stealth swell.

All these elements to align like this would only happen once in a blue moon, but to have the potential for it to occur once is one time too many.

Tragedies like Hillsborough should have taught us to safe guard against a repeat. To ignore the Taylor Report and legislation in the 1989 Football Spectators Act demanding all-seater stadiums, would be a step back. A step in the direction of needless danger.

Events at Manchester City on Saturday display only one perfect storm template. There are countless others and it’s the ones that can’t be imagined that will slip through the net.

In hindsight, the safest thing City staff could have done was to deny access until each supporter could be counted through one at a time. It would have led to mass disappointment and thousands of refunds but wouldn’t have courted with danger.

Because the match day experience in England is now so sanitised, the staff working the grounds, many of them too young to recall the tight-packed days experienced in places like Maine Road’s Kippax, don’t appreciate how close they are to catastrophe.

Without better training and education, highlighting the unique hazards packed sporting events face, errors in judgement would prove fatal if the safeguards of the Taylor Report are removed.

The words “safe” and “standing” should never be placed together and spoken aloud in the Premier League. Failure to heed the warnings of the past will see the future tainted with further failings.

One thought on “Safe Standing is Football’s Oxymoron”