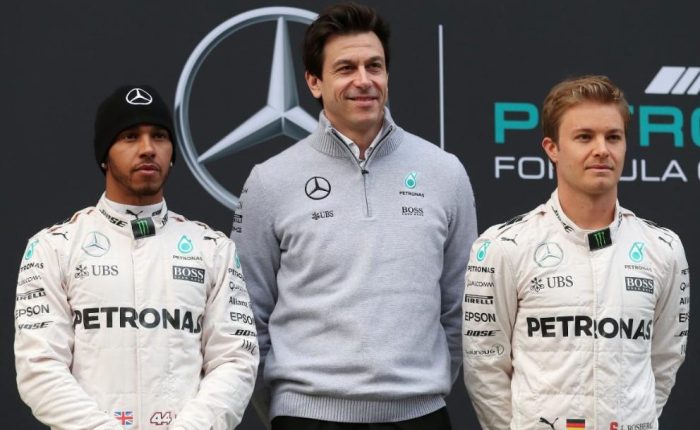 With three races to go on the Formula One calendar, the Drivers’ Championship hangs in the balance. Lewis Hamilton no longer controls his own destiny; Nico Rosberg doesn’t need to win again to clinch his first world title. In the background Mercedes holds its breath, acutely aware the tense relationship between the pair could fracture the team. Each of the three parties has a loaded gun pointed toward the one they deem weakest. Can there be a happy ending?

Toto Wolff has his pistol pointing at the talented British world champion. In any team sport an individual can never become more important than the group they represent. Wolff has been gifted reasons to come down on Lewis should he feel the need.

The Snapchat episode, and then Hamilton’s decision to leave the following press conference without taking a single question, add to moments that could be interpreted as unprofessional. The most telling is Lewis’s comments that a “higher power” was responsible for his continued reliability issues.

In hindsight, he probably regrets airing this concern in public. All it does is pave the way for more (ridiculous) conspiracy theories and is the slap in the face to those that work hard each weekend to give him the best chance of victory.

It does look bizarre only one driver using the Mercedes engine is victim of all the failures, especially when they are unique and do not follow a pattern. Nevertheless, it is still more likely to be coincidence than the team sabotaging results to ensure they have a German champion in a German branded car.

As hard as it will be for Lewis to hear, Toto will – in a roundabout way – remind him the Mercedes is the best car on the grid, that anyone would jump at a chance to be there because it’s the best chance to win a title. Wolff would be sad to see such a talented driver leave but if he did, there’s no reason to believe Mercedes would struggle win the Constructors’ Championship.

But the Austrian points the gun reluctantly. The best teams want the best drivers and Lewis still tops that list for most. A shot fired would be sent with a heavy heart.

Pointed at Wolff’s head is Nico’s pistol. This year he has defied perception. Ever since Lewis joined Mercedes it’s looked like the German has been in his pocket. It’s been said many times that Nico couldn’t compete wheel-to-wheel but the gap between them was more than this. Lewis had better pure speed, he gave the impression he had the ability to find a few more tenths when required while Nico was already at his performance ceiling.

From a psychological point-of-view, this eroded Rosberg’s ability. It was a vicious circle that the German appeared destined to repeat forever.

Bad luck finding Lewis may have provided impetus to Nico Rosberg, allowing him to amass an early championship lead, but it also allowed him to exorcise some demons. Even when Lewis started his fight back, this new Rosberg didn’t fold. With every passing race, he’s gone from a man in Lewis’s shadow to a man looking like a worthy world champion.

If Lewis does create disharmony within the team, Nico can politely point out he had to suck it up when the Brit was taking titles and that he’d expect nothing less than the same support. The team couldn’t offload their new German world champion who has impeccable conduct, in favour of a guy with a chequered history when it comes to behaviour.

Which leaves Lewis Hamilton: the man with two guns.

The first of those is firmly aimed at his teammate. He can’t fire him from the team but he can break his spirit to such an extent that Mercedes no longer rate him worthy of a drive. When Rosberg outperformed Michael Schumacher, then team boss Ross Brawn commented that Nico could be the fastest man on the grid, implying Schumacher’s performance was still of a high standard.

There is now weight to that remark. Given the best car, Rosberg has held his own with Hamilton. Given some confidence, he stands on the cusp of a world title. It’s the type of belief he displayed after getting results against the old master and legend, Michael Schumacher.

But Hamilton has had the privilege of a better car and scoring the first world title on its behalf. This has given him the upper hand. Their history goes back to childhood and one wonders if there’s some hold Lewis has over Rosberg that the German can’t shake. Every time Nico matches Lewis, the Brit finds another level. A win in Austin and now a pole in Mexico, the doubts must be creeping into Rosberg’s mind.

To be within touching distance of the title and have it snatched would cement the mental edge Hamilton has over Rosberg.

But it’s the gun Lewis holds in his other hand that should be the real concern. It isn’t pointed at the towering Toto Wolff – it’s pressed beneath his own chin.

Despite the impression he can mentally break Rosberg, the person he causes most psychological damage to is himself. He’s a guy that wears his heart on his sleeve but far too often likes to write his own narrative. The early season party lifestyle was moulded into some character transition. That the flying Lewis needed to let his hair down to focus best on the track.

But the truth is, when the going is good it doesn’t matter what Hamilton is doing on or away from the circuit. The problems begin when he starts to write dark chapters instead of taking a step back from the circus.

He has showed cracks in the past, most notably when Button got the better of him as teammate. We saw then, as we have again this season, the exuberant Lewis become a moody, withdrawn, petulant impression of a teenager.

But he’s thirty-one years of age and should be setting an example as a world champion when off the track. Bad winners are worse than bad losers, Lewis is displaying traits of both.

Should Nico Rosberg win the title, Lewis has claimed he’ll, “take it like a man,” which begs the question: why hasn’t he managed to so far? If he did jump from the team, there would be nowhere to go following Mercedes of any worth. He’d become the next Fernando Alonso. A great driver, destined to struggle in second-rate cars.

None of the gunslingers can be confident of what the future holds but all three can be certain of one thing: they’ll be more losers than winners.