With something more like trepidation than excitement, more intrigue than expectation, fans waited for Axl Rose to fill the void left by Brian Johnson’s departure from AC/DC. Many fans had been rumoured to have returned their tickets when news the Guns N’ Roses frontman would be part of the tour. This was confirmed by notable gaps around the Etihad Stadium in what was originally a sell-out.

In the article Hire Your Guns, even this writer poured cold water on the idea of an Axl led AC/DC tour. Thankfully those fears were ill-founded and every doubter in attendance will happily eat humble pie. That’s if there’s any left after Axl Rose himself has finished filling himself up.

The key to the Rock or Bust Tour‘s success appears to be how humbled the singer is. The self-serving aura, once as familiar as his bandana and screechy voice, has been replaced with focus and composure. This isn’t to say he’s lost his edge, he just isn’t over it anymore.

The show begins with the large video screens blasting us from outer space down to Earth. The first song is “Rock or Bust.” Axl walks into it (quite literally now, even with a leg brace) with a natural demeanour and perfect voice. But it’s the classics people are waiting to hear, worried they are minutes away from watching a band destroy its legacy.

“Shoot to Thrill” follows and then “Hell Ain’t a Bad Place to Be.” The latter providing a glimpse that would be later confirmed – Axl is more at home with the Bon Scott songs. That doesn’t stop the band diving straight into “Back in Black.”

Their bestselling song and most iconic Johnson number could have been an awkward moment but it passes as a thing of beauty. Again, Axl appears aware of the delicate position he is in. Rather than mimic the guy he replaced or try and reinvent the sound, he does what he was hired to do: give it the justice it deserves on the main stage.

Once the show starts, neither the band or audience look back. This is AC/DC at their best. Renditions of “Sin City” and “Riff Raff” breathe life into classics that have been underserved in modern times. This doesn’t feel like a substitute line-up anymore, rather a refreshed one with the ability to continue after this loan period. This isn’t elaborate karaoke but a viable alternative for an aging band.

Even with all the plaudits going to Axl Rose, some should be saved for Angus Young. For a guy in his sixties he shows no sign of age, in both his physical exertions or playing ability. He has always been the focus of live shows, now more than ever he is the face and force of the band. The unit only has the chance to shine because of his abilities.

Where the future lies for AC/DC only Angus truly knows. Axl has spoken of a desire to carry on, even record with the band, while Johnson believes he has found a hearing cure.

If the Australian rocker decides to stick with the Guns N’ Roses frontman, he won’t be short-changing the fans but breathing life into the line-up.

The Coldplay juggernaut returned to Manchester with A Head Full of Dreams Tour on Saturday 4th June. Last time the band came to this part of Britain it was to promote the successful Mylo Xyloto album. Within seconds of the first song, fireworks blast into the Manchester sky, signalling the bands ambition to continue as the world’s leading stadium band.

The scope of the spectacle should be applauded. From the Viva La Vida tour, where they filled Manchester’s Old Trafford Cricket Ground, to the peak of Mylo Xyloto, they have morphed into global heavyweights. It was at Old Trafford they proved a Coldplay gig could be upbeat and had the ability to appeal to a wider audience. Mylo Xyloto gave them the tools to do just that.

The current tour solidifies the position made from two albums ago but it also makes certain truths startling obvious.

Just as A Head Full of Dreams in album form fails to break new ground and live up to Mylo Xyloto (and maybe even Ghost Stories) this current tour is a rehashing of what has worked before. That’s not to say it’s a failure – far from it. Any Coldplay fan, extreme or casual, will have one of the best nights of their life. “If it ain’t broke, don’t fix it.” With this in mind, the formulaic nature makes sense.

The Xylobands have returned and watching the Etihad Stadium light up and flash in time with the songs is a sight to behold. All the recent hits you’d expect are in there and early on blended with classics. Switching from “A Head Full of Dreams” to “Yellow” before touching on “Every Teardrop is a Waterfall” then “The Scientist.” With such a rich back catalogue Coldplay could double their concert time and still have no fillers. As such, at just two hours, many favourites were omitted.

A “Paradise” dance mix led the band into a touching Muhammad Ali tribute before playing “Everglow.” It was a rare moment in a gig where band and audience unite as one. David Bowie was also paid respects on the night. The band covered “Heroes” after playing “Fix You,” ensuring they had everyone’s attention before giving a nod to a legend.

In another special moment they played “See You Soon” (found on 1999’s The Blue Room), explaining how they’d played it in front of three people when performing as a closing act at a Manchester festival back in 1998. Lots has changed for the band since then but the ability to tap into that earlier sound is still present.

Overall, Coldplay’s visit to Manchester was a great success and keeps them at the top when it comes to modern stadium bands. To stay there, they’ll need to add more substance to the gluttony of style currently being utilised. 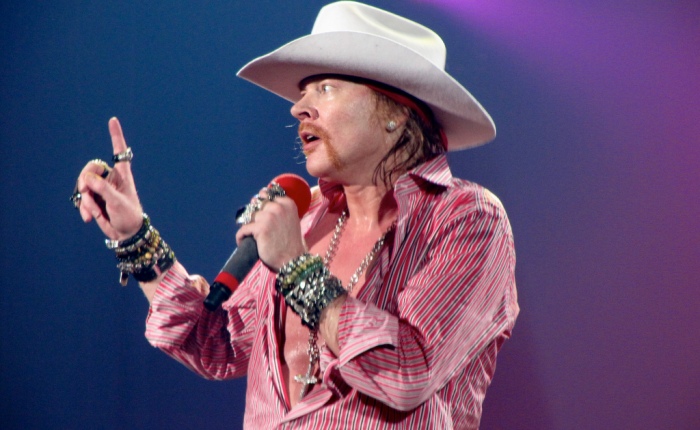 After weeks of speculation, the rock family tree finally sees another connection. Axl Rose will join AC/DC, enabling them to complete their Rock or Bust world tour. Suddenly that title has a greater meaning. Have the aging rockers just taken their biggest gamble?

There’s no doubt W. Axl Rose catches people’s attention. He has courted controversy that has only been topped by AC/DC’s undesired foray into the dark side of the media. Where Rose appears to thrive on scandal, DC’s management has spent the last eighteen months trying to deflect negative media stories. From arrested drummers to career ending illnesses. Brian Johnson’s recent departure was the climax of a turbulent time.

Well, it should have been the final act. Since joining the band in 1980, Johnson has seen their biggest commercial highs (Back in Black), sustained exposure in America, and a genuine resurgence and acknowledgement of their reign with Black Ice.

Rather than fade into the night, confirmed as kings, they stuck around. They are only one of several rock bands that can fill stadium tours and still have thousands unable to get tickets. They have never attempt to upset the formula. AC/DC play good old fashioned hard rock and roll. The sound rarely deviates, neither does the popularity.

So why take the risk? Is the hunger from the remaining skeleton crew so strong they must go on at all costs? What makes the appointment of Rose an even more interesting proposition, is how initial reports at the time of Johnson’s departure claimed the Geordie frontman was unaware he’d been axed from the tour.

He had performed knowing the doctor’s diagnosis. It seems the band made the decision for him once they got wind of this. Only they know if this was an act of mercy or a deceitful plan to replace a singer they perceived to be on the decline.

During the Black Ice tour Johnson had spoken as if it could be his last. However, it proved not to be. He clearly still had the drive to perform as the voice of the world’s biggest rock band. But it could be his pondering during this period made the other members draw up a plan B.

That fresh alternative would need to bring a dynamic perspective. A new unknown would have been a gamble but a great way to break free from comparisons. Somebody that could do better justice to the original Bon Scott sound would have been a request from diehard fans. The ability, should they choose to carry on for years, to produce a definitive new album.

What they went for was rock’s version of a diva.

Nobody can doubt Rose’s charisma. After years of floating around with a band flogging a dead horse by using the Guns N’ Roses name, he remains in the public conscious because of his personality. His ability will be truly tested once again. This is a major step-up from his current comfort zone. There’s a good reason that former bandmate, Slash, enjoys so much critical acclaim with Myles Kennedy while Axl only makes headlines for being late at gigs.

All that aside, the thought of him fronting a new look AC/DC is tantalising.

It was put to Slash in an interview with Chris Jericho that a reformed Guns N’ Roses would be about the only band that could fill stadia like AC/DC manage. Slash agreed but said he was yet to get the bug. Rose obviously feels different. Unable to work through differences with his former guitarist, this offer gives him a pass back to the big time.

Chinese Democracy was eight years ago now. It didn’t give Axl the rebirth he’d hoped. The elevation in exposure he’s about to experience will. Just how these rock giants will mix, only time will tell. Will AC/DC play the odd Guns N’ Roses number or will it be a strictly DC set? And the biggest question is how will they deal with Rose’s eccentricities.

A failure to make a date because of his behaviour will surely put the final nail in the coffin for all those concerned.

Let’s hope nobody tells AC/DC to “Fire Your Guns.”